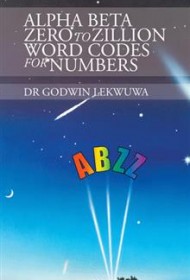 Although there are only 10 digits in existence, the composition and length of numbers that those digits combine to build are vast. In today’s digital world, we are continually asked to have increasing number combinations (passwords, phone numbers, etc.) that we are responsible for maintaining.

In Alpha Beta Zero to Zillion Word Codes for Numbers, Dr. Godwin Lekwuwa presents us with his method for converting those number combinations into word codes that he purports are much simpler to remember for those who prefer memorizing words to numbers. Lekwuwa says he drew on the historical work of mathematicians in the word code field to enhance his own study experience while a student in neurology and medicine, and devised this system substituting consonants for digits, then memorizing words built with those consonants along with vowels that act simply as the glue in the words.

For example, to memorize the bank pin number “3596,” one could use the word “TULIPS” (T=3, L=5, P=9, S=6). His system has specific consonants that represent specific digits (he assigns two consonants to each digit), and, while two-thirds of his book is a matrix of pre-determined words for the numbers 0-9999, he also encourages readers to build words that are more meaningful to them.

The system works, although it does take more than a few experiments to master. And its practical applications, such as disguising PIN numbers, are enticing. The author also notes that “regular usage would improve cogitation, concentration, attention span, vocabulary, spelling abilities and memory.” While that may be an overly broad claim, there’s no question this method requires mental exertion—which can also be a downside: Is converting a phone number to the word “Recalcitrant Bully” really easier than simply memorizing the numbers themselves?

Many readers will lack the patience this system seems to require to master, but those who enjoy experimenting in mathematical word codes or cryptography are likely to find Lekwuwa’s book, and idea, intriguing fodder for thought.