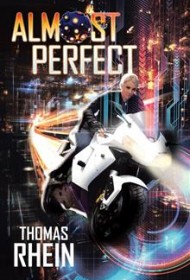 Thomas Rhein’s pulse-pounding debut novel is an erotically supercharged science fiction cautionary tale set in near-future Chicago. It revolves around the architect of the most advanced artificial intelligence ever created and the consequences of him putting his career, finances, personal life, and ultimately the welfare of the country in the AI’s godlike hands.

Mark Palmer is the creator of George, a seemingly omniscient artificial intelligence whose primary task is to oversee a military base. Endowed with great processing power, George literally sees everything: It even monitors the heart rates and brain activity of VIPs of the facility.

George watches as Captain Reyna Powell—an oversexed blonde bombshell with a penchant for speed—not only seduces his creator Mark but also other high-ranking officials at the base. With a revolutionary fighter jet in the works, George understands Reyna’s motivation: She wants to be the first to pilot the state-of-the-art craft. But the AI also understands that his creator is becoming emotionally (and physically) attached to the morally bankrupt seductress and must do what is necessary to protect Mark.