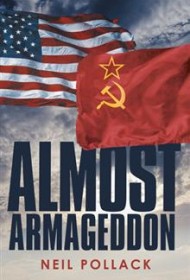 Neil Pollack knows how to tell a story; Almost Armageddon is a gripping read from beginning to end.

The spy thriller begins with a prologue in the present and ends with an epilogue back in the present. The two bookend a story that’s essentially a long, engrossing flashback told as an omniscient narrative and including the points of view of the protagonist, high school history teacher Alex Bell, as well as other characters.

The story is set in 1991: Bell, who was born in Russia but moved to the U.S. as a kid after his parents died in a car accident, is unexpectedly invited to go on an exchange program to teach students in Moscow. In Russia, he quickly makes friends and within a short time meets several attractive women who play a part in the mystery he’s about to stumble into. Meanwhile, we learn of a plot to kill President Mikhail Gorbachev that could change the course of world politics. We also learn that Bell’s father, formerly known as Yuri Belkov, is actually still alive and is the mastermind behind the assassination attempt.

Bell, whose name as a child was Alexei Belkov, meets a CIA agent who uses him to ferret out Yuri Belkov by offering to help him learn the truth about his parents’ death.

Despite the fact that readers know the end (Gorbachev wasn’t assassinated, after all), Pollack tells the story with skill and cunning. He reveals just enough information to keep readers hooked until the time is right to tell all. For instance, the identity of two characters —Yuri Belkov and a seductive female assassin— remains a mystery almost to the end.

Throughout, Pollack shows his enjoyment of writing, with elegant passages such as this description of the female assassin: “…she was an apparition whose worldly vestiges were the bodies she left behind — a zephyr silently creating fallen leaves.”

Anyone who loves a good spy mystery or political thriller in the tradition of John le Carré or Barry Eisler will devour Almost Armageddon.