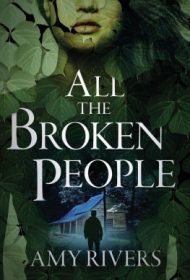 Amy Rivers’ All the Broken People is a suspense novel set in the mountains of Georgia, revolving around domestic violence.

Alice Bennett, a magazine writer, heads to Georgia to care for her mother-in-law, Mae, who is convalescing after a fall. Once there, Alice finds that the town she once thought idyllic is hiding secrets, some very close to home.

The decades-old feud between the Bennetts and the neighboring, ne’er-do-well Simms family has created deep resentment in Larry Lee Simms and something much darker and more violent in his sister, Beth, both victims of their mother’s vicious abuse. They focus their attention on Alice, who is struggling with her own painful past as the daughter of an abusive alcoholic while also working on an assignment about a young woman in a nearby town killed by an abusive husband. When a series of mysterious violent attacks escalates—animals are mutilated, the Bennett family dog is knifed, and a neighbor is brutally beaten—Alice begins to fear for her life and Mae’s.

This has the potential for a dark, brooding story about how domestic violence echoes through generations. Unfortunately, the novel becomes confused by too many extraneous story lines: Deputy Morrison’s crush on Alice; Deputy Carver’s drinking history with Larry Lee and Beth’s father; Alice’s sister-in-law’s history with her brother; and Larry Lee’s friend’s connection with Beth. Alice’s magazine assignment seems entirely unnecessary.

Larry Lee is given one of the strong viewpoints in the book. This choice weakens the tale significantly because the story’s core is really the contrast between Beth and Alice: how one was destroyed by abuse, becoming abusive herself to the point of murderousness, while the other struggles valiantly to leave her past behind.

All the Broken People would have been much stronger had it had focused on this theme and pushed the other plotlines to the background. As is, the flawed storytelling is likely to disappoint most readers.