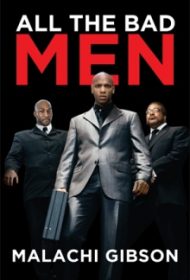 Malachi Gibson, the author of Johnny’s Journey (2015) and the prison drama Thirty-Three Years (2011) returns with a story of urban crime culture and religious redemption.

Although ostensibly one tale, the novel reads like two different stories. In the first, we meet AD, “king of the drug dealers in the city of Pleasantville.” AD is a loyal husband and father who rules the streets ruthlessly with his lieutenant JD. When a teenaged good Samaritan, LaQuan Robertson, starts writing editorials in his high school newspaper condemning AD’s trade, as well as police corruption, AD is intrigued and a little amused —and LaQuan shows no sign of backing down when he meets AD face to face. “Just so you know,” he tells the drug dealer, “I’m not in the habit of quitting when things get a little rough…” Eventually, the two become unlikely friends, even collaborating with the FBI to take down a pair of corrupt cops who nearly kill LaQuan in a hit-and-run assassination attempt.

The book’s second half details what happens when AD decides to go legit, adopting the name Tony and opening a nightclub. Tony’s life gets messy when his favorite cousin, Franco, returns to town with his partner-in-crime, Dean, and starts robbing the drug dealers that Tony left behind. The story culminates in a bloody firefight before Tony, Franco and Dean—incongruously—abandon their criminal careers for life as members of a local church.

Gibson skillfully portrays a gritty urban milieu, but unfortunately the novel never congeals. LaQuan is a likeable if naïve character, and his relationship with AD/Tony is an interesting alliance for two characters who started on opposite sides of the law. But stiff, explicatory dialogue, a plethora of gangster clichés, and implausible character reversals hamstring the novel’s ambitions to inspire—as do the story’s two, disjointed parts.

Ultimately, neither the upright citizen LaQuan nor the redeemed sinner AD/Tony succeed in fully rescuing a twisty tale from its own storytelling shortcomings.