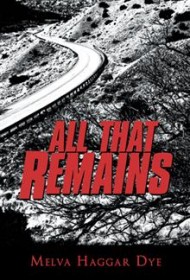 In Melva Haggar Dye’s All That Remains, Little Alexa has vanished without a trace over a year ago. Her mother, Thea, is convinced she’s alive, though two other young girls snatched in the Dallas area have been found dead. The tension has irrevocably broken her marriage, so Thea packs and leaves, eventually landing in Santa Fe where the art teacher hopes to heal emotionally by starting a new life as a potter.

Meanwhile in Colorado, a barren mother stumbles across a child dropped by the roadside in a snowstorm and convinces her husband the girl is a gift from God and that they should raise her as their own.

Dye has written an absorbing mystery, skillfully blending characters and story lines with depth and interesting details. Her writing style is equally pleasant. In describing a winter scene, for example, she says: “The trees, stripped of their fiery autumn cloaks, now stood naked against the brilliance of the snowy landscape, and sagebrush and rock were transformed into frosty little mounds. Santa Fe snoozed.”

While the story centers on Thea’s experiences, side chapters draw out the story of Hurley Dobbs, the man haunted by his own demons who is doing immoral things to little girls. Charlie and Peg, who find Alexa, are equally well developed. Unfortunately, Alexa (named Reagan by Peg) gets less attention as the victim. Though we get inside Alexa’s head as she ponders the cause of her nightmares, the effect is emotionally flat because the language employed never reveals the impact of her pain: “Reagan didn’t like dreams, not the bad ones, anyway… Funny thing–she never remembered what happened in the bad ones, only that they were very, very scary.”

In short, All That Remains is a highly credible and captivating book. While labeled a thriller on the back of the book, readers will find that it fits more appropriately into the mystery genre.