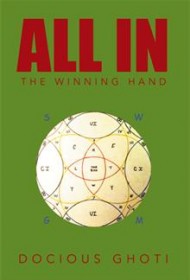 The question of whose God is superior has spilled more blood across the centuries than any other. So what if the answer is no God at all? What if you are master of your own fate?

It’s a concept author Docious Ghoti embraces in his book All In: The Winning Hand. The title is catchy, hinting that life is a gamble you need to bet on fully, but such cleverness, sadly, disappears beyond the book cover.

Some solid, common sense advice hides amid the author’s rambling and pretentious blueprint. He urges readers to set their own course and to take responsibility for their actions. “Support individuality and respect diversity,” he counsels. The takeaway message is that one doesn’t necessarily need the mysticism of traditional religion or prayer —- both of which he deems illogical.

This is a valid point, but it falls apart when it becomes clear that the very structure and sanctimony the author rails against is at the heart of his proposed alternative. Even as he bitterly dismisses organized religion, (a “death grip” on humanity), he strives to set up his own complex belief structure, named for his family, to lead readers to better lives. To dwell in the House of Ghoti one must follow the “eight axioms of logic that allows room for 14 principles of life.” It all supposedly comes together in the “Wheel of Logic,” which sets a moral code for followers.

But such teachings have little meaning if readers have to struggle to decipher them. Ghoti’s writing is stilted and self-important. “The path that is offered to humanity is soon at hand,” he writes, then launching into an overly complicated system that readers will find difficult to understand.

In the end, the passages readers can discern offer little that New Age devotees haven’t heard before, and the author comes off every bit as arrogant as those he accuses.