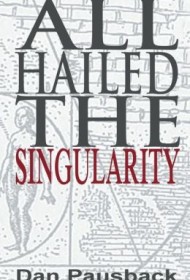 All Hailed the Singularity takes place in a future where mega-corporations run the world, robots and drones make up most of the planet’s work force, and teleportation—as well as the ability to store matter in a two-dimensional, holographic state—is a reality. All citizens are required to have a “life chip” that supposedly ensures a safe society. Deviants who refuse or are incapable of receiving these life chips are subjected to “remolecularization,” meaning they are forced into a state of digital storage by the ruling global corporation, OmniaR.

When a vicious hacker called Brimstone releases a virus through the life chips, cop Jake Kepler embarks on a fast-paced mission to stop the cyber-villain before humanity is deleted.

Before the action hits its stride, the density of Pausback’s prose weighs down the pacing and the first few chapters are a bit of a slog. Pausback’s subject matter and world building are ambitious, to say the least. Additionally, as the story takes off, he sometimes sacrifices character development for the sake of break-neck plot advancement. Kepler is often as two-dimensional as the citizens stored in holographic stasis; he reads like an action-hero trope whose gut and grit approach is misunderstood by his superiors, but ultimately proves valuable.

When the pacing gives space for more dialogue and description, however, the writing is both sound and smart. Overall, the action reads like a movie or video game sequence with thrilling, imaginative passages that are pure adrenaline.

Fans of thoroughly conceptualized apocalyptic worlds and breathless action may be willing to forgive the shortcomings in characterization. If so, they will enjoy this ambitious cyber thriller.