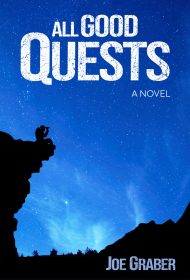 In Joe Graber’s intriguing novel, All Good Quests, a freelance adventure writer goes in search of a prominent businessman who suddenly disappeared. The winding journey causes him to consider his own solitary life, reminisce about his past, and contemplate his future.

The story begins as Brogan Quint, a journalist for Odyssey men’s magazine, is dropped off on the western slope of the Alaskan Range with a stuffed backpack, rod and reel, and a Ruger 10/22 Takedown rifle.

It then jumps back in time to Virginia, where Quint’s editor, hoping to capitalize on the mysterious disappearance of Colorado billionaire John Breckon, tasks Quint with profiling the “real” Breckon, a closet adventure junkie. During a visit to the man’s private Colorado sanctuary, Quint discovers personal items that eventually lead him to Alaska.

The smart, first-person narrative plays out against opposing backdrops of the remote Alaskan terrain and a small picturesque town in Virginia. Readers see Quint’s challenges as he pursues Breckon’s story in Alaska, and learn of his earlier days in Virginia, where, in addition to profiling Breckon, he’s covering the Great Highland Fling, an outdoor adventure competition. There, Quint develops friendships with quirky townspeople, including a young mother and son who draw Quint in and help him appreciate this friendly enclave.

Throughout, Graber delivers believable characters that have more in common than they realize. Whether following a loner’s path, dealing with tragic loss, or acclimating to a new homeland, their interactions explore genuine, heartfelt concerns that readers will relate to.

Graber also skillfully maintains tension as Quint faces the unpredictable wild. With details of cold, isolation, precarious climbs, and the realities of the predator-prey world, readers will wonder, like Quint himself, if there’s a way out.

In its full-circle outcome, All Good Quests proves itself a well-crafted, immersive story that will entice anyone who enjoys adventure and mystery, all wrapped in a thought-provoking journey of self-discovery.