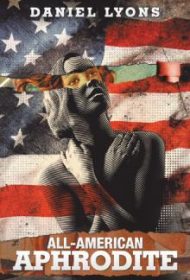 Daniel Lyons’ political thriller follows a journalist as she investigates the forces at work behind a sex scandal.

The novel begins as Senator Milton Bergman, of Washington state, is caught in a hotel room with a prostitute called Atalanta.  Desperate to protect his reputation, Bergman lies and claims the encounter was a set-up.  In a sense, however, he welcomes the scandal, as it distracts from a deeper secret he guards even more closely.

As Bergman fights to save his career, jaded reporter Natalie Schroder receives an assignment: to find out more about Atalanta and the mysterious escort agency she works for, Fantasies Inc.  Schroder deploys her tough, highly sexual persona, coupled with unorthodox methods, to get her story.  But she may have met her match in the powerful interests keeping Fantasies Inc. in the shadows.

All-American Aphrodite is unabashedly raunchy throughout. Lyons gives fair warning in the book’s first few pages, as he graphically describes the aftermath of Bergman’s tryst, including a reference to “two specks of his semen . . . still wet, on the sweaty hillock of [Atalanta’s] right buttock.”  The over-the-top tone and content are sure to delight some readers while offending others.

Schroder is a remarkably well-drawn character.  Cantankerous, libidinous and savvy, her voice (both in dialogue and close third-person narration) lights up the narrative.

Overall, however, the novel feels too short. Toward the end, Lyons piles on plot developments that feel muddled and abrupt.  Each development is promising in itself but simply needs more space to get readers onboard.  On a character-oriented note, there is an intriguing hint that Schroder may be genderqueer, an unusual authorial choice that Lyons would do well to develop further.

Lyons’ gonzo, no-holds-barred writing-style offers an inspired take on the thriller genre. With more development to flesh out its excellent stylistic bones, All-American Aphrodite could easily become a cult classic.