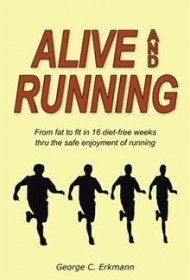 This slim volume could whet the appetites of couch potatoes to get up and start a running program.

Author George C. Erkmann has clocked over 50,000 miles in 45 years of running, including 38 marathons (among them the premier New York City and Boston marathons). Though matter-of-fact about this accomplishment, he savors its benefits to his health, energy and well being and encourages other people to experience them, too.

Erkmann did not set out to be a super-athlete. Once a thin, active kid, he packed on pounds as an adult in a sedentary job. Thanks to Dr. Kenneth Cooper’s book, Aerobics, Erkmann realized that exercise was the solution to his weight gain. So, he started running — and hasn’t stopped.

The book offers details about what he’s learned over those years and miles, including: how to choose the right running shoes; what to eat when preparing for a long run; the merits of various running surfaces. He also delivers helpful safety pointers, advising those who run on roads, for example, to wear clothes that are “obnoxiously bright” and explaining the importance of knowing the Temperature-Humidity Index on any given day before running, to avoid risking health problems.

A book with information this helpful deserves better production. This volume features sloppy typography (for instance, the left-hand page gutters are so small the type nearly runs into the binding) and dated items, e.g. 1998 statistics on pedestrian/runner fatalities in NYC and the need to carry coins for public telephones.

Erkmann also occasionally offers anecdotes where solid information would be preferable (for example, his confusing story about going for a run after a heavy dinner that appears under “The Emergency Kit—Part 2,” but doesn’t seem to explain anything regarding an emergency kit).

Readers will need to look elsewhere for complete training programs or state-of-the-art information on running biomechanics or injury prevention. However, as an example of a life improved by running, Erkmannn is the man to beat.