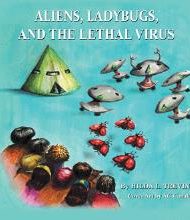 As the story begins, a ladybug family dances and sings – until they suddenly see a spacecraft land nearby and “mushroom-shaped” aliens disembark. The aliens inform the ladybugs that they have come to help the ladybugs with a special mission: to save children from a deadly virus in Hopeville, Texas.

The aliens’ robots equip the ladybugs with a microchip containing the cure, and soon the ladybugs head for the Hopeville hospital, where they visit each sick child in a repetitive sequence of events. Eventually, thieves from Pharmco attempt to steal the ladybugs and, thereby, withhold the cure from the sick kids. Will the vaccine get to the children in time to save their lives?

The characters’ names often describe their functions. For example, Captain Mushroomy is captain of the mushroom-shaped aliens. There’s Dr. Hopey, Professor Nerd, First Lieutenant Freedominy, Second Lieutenant Justiciny, and Staff Sergeant Informiny. The latter names, and many others, seem unnecessarily difficult and will be hard for anyone reading the story aloud to pronounce.

Additionally, the story suffers from stilted prose and dialogue. For example, Carlos’s mother says to her sick son: “Carlos, Valentina, your nine-year-old sister, needs to talk to me.” Another time, a doctor thinks to himself about his patients’ fate: “We must be optimistic, and I feel my brain and heart pulsating just thinking about it.”

Finally, the ladybugs often sing to the sick children to distract them from their illness, using partially rewritten lyrics from dated songs, such as “You Are My Sunshine” and “Deep in the Heart of Texas.” While the more recent 2007 book Diary of a Wimpy Kid is mentioned, most other references seem out of touch with today’s children.

The story reinforces the admirable concept of helping others despite the personal cost. Unfortunately, its flaws make it unlikely to connect with modern young readers.