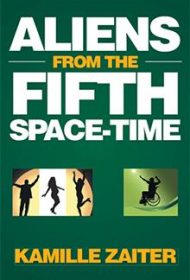 Aliens from the Fifth Space-Time presents an alternate universe where a mostly Earth-like planet, Globe, is visited by a variety of aliens from another space-time dimension.

The aliens, called Tymans, need help from Globe scientists to fix an issue with their battery system so that they can return to their dimension. This leads them to contact the story’s main protagonist, a nuclear physicist named Aston. They attempt to work with him, as well as the dean of his university and several of Aston’s colleagues to collect the items they need.

Aston finds himself at first confused, then fascinated by the aliens, who can become invisible and alternately appear in strange forms (for instance, a profane young boy or a female clown). Ultimately, the aliens become involved with violent conflicts on Globe that threaten our heroes.

That’s the novel’s basic premise, but the narrative incorporates a far more complex array of elements, both in plot and theme. It touches on the relationship between faith and science, along with how each inform cultural and political conflicts on Globe. Aspects of personal identity and acts of terrorism, among other issues, are viewed and judged through the viewpoint of the aliens.

Unfortunately, while the author has carefully considered how space-time dimensions work and relate to technology, the storytelling itself rarely achieves any narrative momentum or drama. Nearly every development is excessively explained by both alien and human characters through long, dry, unnatural monologues. A kidnapping and escape midway through the story energizes the narrative a bit, but it has an overly violent tone that doesn’t fit the rest of novel. Similarly, in a plot point early on, Aston acts in a way that could be devastating to both his personal and professional life, but the story never resolves the issue in a satisfying way.

Aliens of the Fifth Space-Time doesn’t lack for interesting ideas, but ultimately, it requires a more engaging narrative to make readers care about them.