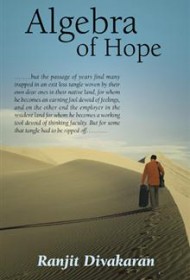 A stranger in a strange land, the outsider unable or unwilling to fit in, is the theme of this novel detailing the struggles of an idealistic young doctor.

Rakesh, an expatriate Indian doctor filled with dedication and selflessness, has taken a job at a private clinic in Saudi Arabia where he soon discovers that “the patient here was just a commodity,” and that the only line that matters is the bottom line. Consumed with idealism when he first sets foot in Riyadh eager to serve, the young physician has actually landed instead in a bureaucratic thicket where profit is king and shortcuts are legion, even those threatening the patient’s well-being.

Working with a feisty and energetic nurse and supported by a few others both within and beyond the clinic, Rakesh struggles through and eventually succeeds in maintaining his own integrity and besting the cost-cutting management. But what we are not told until near the end (and then only in passing) is that his stay in the Persian Gulf has lasted for many years, and that during that time he has had scant physical contact with his wife and children left behind in India. Although such issues must loom large in the life of any expat, they are neglected here.

Further marring the narrative are some awkwardly placed flashbacks, asides that seem beside the point and some peculiar imagery (as when turning off a car sounds “like a power failure in the midst of a war movie.”)

Feeling like a stranger is a familiar theme in literature, one that could have made this a powerful story. Unfortunately, the characterizations here are a little too shallow, incidents too obvious and the writing too imprecise for the whole to work as well as it could. What does come across clearly is the author’s passion and sincerity. It’s unfortunate that they couldn’t have found a stronger outlet.