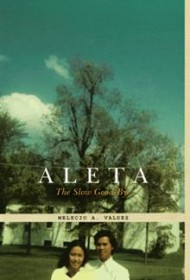 Melecio A. Valdez’s straightforward memoir tells the story of a happy marriage. He recounts his 1971 immigration from the Philippines to study theology in Kansas City and countless moves with the Methodist Church and U.S. Army, where he served for 14 years as chaplain. His wife Aleta, whom he calls Leth, is his supportive companion in his ministry, as the couple earns master’s degrees, takes Tae Kwon Do together, and raises two children.

Then, two-thirds of the way through this concise story – in the late 1990s when his wife must be around 50 (though he never states this exactly) – Leth is diagnosed with dementia and Melecio wonders, as his faith is tested, whether he can “remain faithful and loyal as Christ’s disciple.”

Written simply and reflective of the male-dominated society from which the couple came (though her name is in the title, sometimes Aleta seems like a bit character in Melecio’s story), it nonetheless offers a moving conclusion.

Perhaps because we have read largely about Melecio’s self-centered struggles with his career, it’s touching when he turns his attention to describing his recent hands-on care for his wife. At book’s end, when the couple is living back in the Philippines where around-the-clock, at-home care for Leth is affordable, Melecio sometimes grows so frustrated with his wife’s forgetfulness and inability to communicate that he gets in his car, drives around the block “and screams.” Still, he writes, “God blessed me.” When he is away from Leth, he feels lonely, and talking with her gives him great joy, even when she does not recognize him.

His painful story of devotion is a testament to the fact that he has, indeed, served as a fine example of a faithful and loyal disciple of Christ. While his memoir is too personal to have broad appeal, it might offer inspiration for others facing the challenge of an ailing spouse.