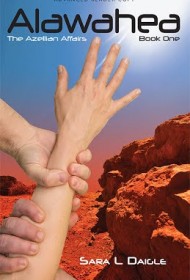 Revolving around University of Denver student Tamara Carrington and her tumultuous relationships with alien exchange students from the planet Azelle, this fusion of soft science fiction and romance is well written, briskly paced, and utterly readable.

Although Tamara seems like an ordinary college student, she is dealing with some monumental issues: A few years back, her prom date tragically died while they were being intimate and now her mother is battling cancer. When it’s announced that a group of Azellians (human-like aliens who are rumored to be gifted in bed and have telekinetic abilities) will be staying on the DU campus, Tamara sees this as an opportunity to walk in the footsteps of her grandfather, a diplomat who, years earlier, traveled to Azelle. Meeting the handsome Azellian ambassador, something awakens inside of her, triggering feelings and abilities she has never experienced before.

This is a compelling, skillfully written story. Where other science fiction romances get bogged down in intricate—and at times, unnecessary—backstory, author Sara L. Daigle brilliantly avoids this and immediately concentrates on the protagonist’s development and storyline. And although the sex scenes are muted (“…his mind wrapped around hers in an incredibly intimate way he had never experienced before. It was a tight spiral, the orgasm spreading out, then back in, through the two of them… ”), the metaphysical aspect of Tamara’s carnal encounters is very much reminiscent of Laurell K. Hamilton’s Anita Blake saga.

It’s unfortunate that the cover and title both convey more of a hard science fiction read than a romance, as they may turn off readers who would find this novel highly entertaining.

Romantic science fiction has been slowly gaining popularity for years: This is a perfect example of a successful blending of those genre elements. Powered by an identifiable and endearing heroine, this novel is just the beginning of what could be a long and fascinating series.