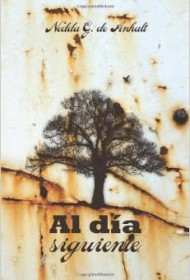 Al día siguiente is an eclectic collection of love poems dedicated to the memory of the poet’s husband. Using a variety of styles that include aphorisms and intentionally cacophonous rhymes, the author questions whether love can remain alive even after death.

The amount of scholarly references interwoven within is remarkable and many of the poems include an epigraph or a borrowed verse from well-known poets. While sticking to the central theme of love after death-do-us-part, author Nedda G. de Anhalt pens playful imitations of works by international poets ranging from Fernando Pessoa to José Lezama Lima, Adolfo Westphalen to Walter Benjamin, and Lydia Cabrera to Jorge Manrique.

Unfortunately, some of the poems that follow these great poets’ quotes fall short of the challenge she is setting for herself. An example of this can be seen in the poem “Aullidos” (“Howls”) or the “Cancionero” (“Song Book”) section, which appear to aspire to a strict rhyming/meter pattern, but break from it seemingly at random, delivering an unmusical effect.

Some of the poems are surprisingly inventive, such as the prose poems from the “Fugacidades” (“Fleeting Moments”) section, which create strange dream-like scenarios—a battle between pairs of shoes, a message sent from the underworld that needs to be deciphered in the spaces between the syllables, volcanoes that fall in love with each other—all of which allow us to sense the presence of the absent loved one, a presence charged with an almost Rilkean electricity.

The book is unabashedly romantic, a quality that could appeal to readers of Rubén Darío and Luis Cernuda. Yet the language itself does not propose anything innovative, and the poetic craft could be improved with some fine-tuning. Ultimately, however, the collection does what it has set out to do, working as a personal tribute to the author’s husband and an essay of sorts about the nature of love and bereavement.