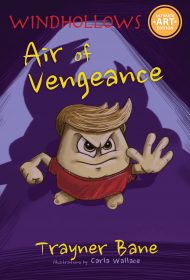 Combining a rich, complex, imaginary world with the inherent humor of flatulence, Trayner Bane presents the first book in his Windhollows series, Air of Vengeance.

The book’s title—readers will quickly realize it’s a play on words regarding farts—might seem to indicate a dashed-off product aimed at grabbing easy laughs for the pre-teen set. But Bane tells an ambitious and expansive tale, centered on Billy Molskin, a “Bare Pants” who was stripped at birth of his PU2, a substance vital to the identity of his fellow Beanies. The theft of the PU2 is the work of Rip Stinker, who, along with his assistant Pootrick, has set evil plans in motion.

The book is written at an appropriate level for children and full of farty puns and names (e.g. “Dr. Lofty Scents”). But Bane also challenges young readers with complex emotions while offering plentiful backstory into why Rip Stinker acts as he does. Billy is similarly developed, especially as he confronts his own anger: “The fear within Billy twists, turns, and convulses until it finally transforms into burning rage. A Peyuma, the most fearsome predator in the Lands [sic] begins to grow deep within Billy, feeding on his lifetime’s worth of anger.”

Air of Vengeance is surprisingly sophisticated at times, and its story unfolds slowly, with a novel’s pace. In this “Ultimate Art Edition,” the text is enhanced with a page of sequential art at each chapter’s end, illustrating key moments that have come before. The illustrations are vivid and sharp—cartoony, but delivering the story’s dark tones as needed. Bane’s prose is solid, but contains a few minor copyediting errors. It can also be challenging to remember all the made-up terms (as evidenced by the 12-page “Dictionary to the Lands” at the back).

Nonetheless, this is an entertaining offering. And while the ending may not be as conclusive as some would like, a sequel is on the way; Bane expects to publish Book 2 soon.