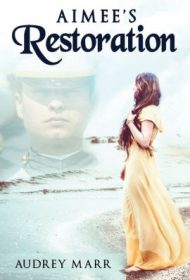 Newly moved to the town of Chamberlain, Aimee is introduced to Rob by her best friend Jane. Jane’s son Seth and Aimee’s son Jeremy are best friends, and Rob is Jane’s cousin. Although they are immediately attracted, Aimee is skittish. Aimee moved to town so she could be near the military academy her son would be attending, and she wants nothing to do with Rob, who bears an uncanny resemblance to her ex-husband and abuser.

Still, God works on her heart, and Rob is determined to woo her. Once Aimee begins healing from her bitterness, she and Rob engage in tender romance. Rob, himself, has not dated much since his fiancée Amanda died in a plane crash, and he’s on his own healing journey.

The characters are beautifully written, the faith-filled passages are inspiring rather than preachy, and the romance is believable. In some places, however, the narration wanders from limited third person to omniscient third person narration and back again, which can be jarring.

More problematic is the dialogue. Often focusing on the mundane, it slows the plot considerably. For example, at one point, Jane offers Aimee coffee: “‘That sounds great, Jane, thank you,’ [Aimee replied]. She walked out and allowed her friend entrance. ‘Well, here she is,’ Veda stated when the younger woman entered the kitchen. ‘Have yourself a cup of something hot. What will it be, coffee, or tea?’ ‘Coffee, please,’ Aimee answered…Scott grinned. ‘Did you get rested?’ “Yes, thank you,” Aimee replied…’I guess I was tired.’”

The novel has the sweetness and innocence of a Debbie Macomber tale and good bones for a sweet, Christian romance. It would reach a much larger audience, however, if the conversations sparkled.

Even so, readers looking for a romantic read that will inspire their faith should find some rewards in Marr’s story.