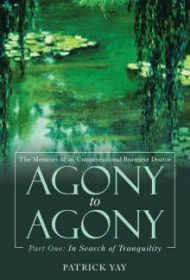 The agony Patrick Yay suffered in his native Burma began in 1962 when he witnessed government soldiers massacring fellow Rangoon University students. His memoir focuses on the painful desecration of his homeland and beloved medical profession by a corrupt military regime.

Yay recounts Burma’s geopolitical history, painstakingly detailing events that fueled the corruption and social ruin from 1941 to 1988. He attended medical school in Burma and practiced there until 1977. Striving to follow his moral compass, he was sorely tested by crooked government officials and greedy colleagues who accepted bribes and favors and expected him to go along. By the time he fled to England, he had “fears of torture or mistreatment, even by my own colleagues, the corrupt senior doctors.”

Yay emigrated to the U.K. without his wife and three young children. Throughout his story, he rarely mentions his family, which has the effect of making him seem self-absorbed and even unkind (e.g,, Yay says his Burmese passport was more valuable to him than his children and wife). After retiring from medicine, Yay moved to Hungary, where he is an artist of some note.

Yay’s first section about Burma’s history is fueled by a still-fresh hatred of the government, often reading like an angry political screed. Subsequently, his writing shifts to more of a memoir style. The uneasy juxtaposition of the two styles is off-putting.

Although Yay’s English often is eloquent, his narrative is sprinkled with typos. Additionally, his dry, textbook-like rendering of Burmese politics includes confusing titles and tedious lists (of newspapers and journals of the time, private armies, etc.). Repetition is also distracting; i.e, on one page, he mentions his reputation as a “generous and good doctor” who treated all patients fairly; this is repeated nearly verbatim on the same page and the following page.

While the author’s knowledge of and passion for his subject is commendable, their rendering is flawed. As a result, his narrative makes for a challenging read.