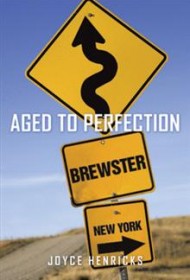 There’s much to like about this contemporary cozy mystery featuring 78-year-old Hannah Lowenstein, Jewish mother, widow, grandmother, and amateur sleuth. Born and raised in New York, Hannah moves to a small university town in Michigan to live with her divorced daughter and two kids. Hannah is an avowed socialist, great cook, and agnostic. She’s opinionated and bossy, but also loving and helpful. She’s a big Sinatra fan, but most evenings, she thrills herself with reruns of Walker, Texas Ranger.

While visiting her friend Ruby at a local nursing home, Hannah learns that several women have simply disappeared from the facility. This convinces her to rescue Ruby immediately and determine the whereabouts of the lost ladies – and she’s not shy about asking her 12-year-old grandson to do a little computer hacking in pursuit of clues.

There are some great sub-plots involving a gentleman from the senior center who is besotted with Ruby. Hannah’s daughter is getting serious with a local attorney, which makes Hannah wonder if it’s time to move out to make room for someone new. Ruby’s son, whom Hannah repeatedly refers to as “a son-of-a-bitch,” is trying to swindle his mother out of her money, but not while Hannah lives and breathes. The book, while funny and entertaining, raises issues confronting seniors, but it’s not all about their frailties and vulnerabilities, it’s about their strengths, too.

The writing is consistent with the best books in the genre. The only element missing is a greater sense of place. What’s the neighborhood like? How is her daughter’s house decorated? The answers to these questions would make the book sparkle. (Think sterling silver versus pewter, though that may be just a matter of taste.) Including the recipe for the ‘no-bake cheesecake’ cookies would also have been wonderful.

This author is ready for prime time, and readers be warned, you might come away from this book with a deep yearning for pot roast and strudel.