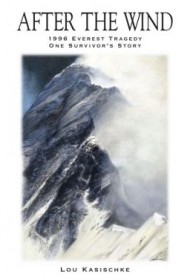 Author and mountaineer Lou Kasischke survived Everest’s worst climbing tragedy on May 10, 1996 by honoring a promise he had made earlier to his wife Sandy. “Live a story you can tell,” Sandy urged Kasischke after he had recklessly climbed a South American mountain in extreme weather while others in his party turned back. Two years later, with daylight retreating and facing an encroaching snowstorm, Kasischke, a veteran of more than 30 ascends, decided not to follow his team leader to Everest’s summit and almost certain death.

After the Wind tells the story of this ill-fated climb, the same one made famous by Jon Krakauer’s 1997 blockbuster Into Thin Air. Kasischke’s perspective, he writes in a “Note to Reader,” was ”different from much of what was written and reported at the time…What is the truth in this story? It depends on whom you ask.” He wrote most of the book in 1997 and 1998, to sort out the facts and emotions of the event for himself and is publishing it now as “an expression of my love and thanks to Sandy.”

Four of the author’s friends pushed forward that day and froze to death (eight people in all died on the mountain that day), and another two were seriously injured. Kasischke’s pivotal decision came after meeting fellow climbers Stuart Hutchinson and John Taske coming down the mountain. Hutchinson told Kasischke it was getting late and he didn’t want to get “caught out.” Being caught out in the open after dark is a climber’s worst fear.

Kasischke debated with himself. Then the howl of Everest’s ever-present wind suddenly vanished and everything went quiet. Kasischke was on his knees. What he heard next saved his life. “I can climb to the top of Everest,” his inner voice told him. “But this is not the day. I’m going home. This is the story I can tell Sandy.”

After The Wind is a thoughtful, well-written love story of Kasischke’s dedication to his wife and anchor Sandy and his passion for climbing. It delivers an edge-of-your-seat description of navigating and mountaineering Everest and is punctuated with beautiful illustrations nestled in each chapter. Those new to the story, as well as anyone hooked on Krakauer’s original tale, will find After the Wind an engrossing read.