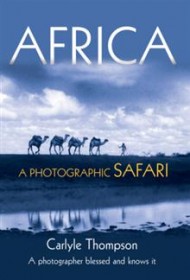 Carlyle Thompson spent five days on photographic safari in Kenya, South Africa. This narrative, part journal, part travelogue, is based on his experiences.

There’s a charming innocence about Thompson’s journey: He often tears up at the landscape’s beauty, for example, and at the hospitality and poverty of the native people. But too often his naivety becomes cloying. Carlyle is sickened by the sight of trees stripped of their bark by feeding elephants and feels sorry for the “innocent trees that had suffered so much punishment for their participation in the beautification of Africa.” Common lizards merit as much attention as elephants. A leopard track outside camp makes him seriously consider abandoning his trip (whereas most people would be thrilled to see a predator’s track, usually one of the highlights of being on safari).

At worst, Carlyle’s writing bogs down in minute, irrelevant detail, describing everything from his morning shower to his stomach growling at mealtime to his nightly prayers.

At best, Carlyle’s work gives brief glimpses of the inner man. He struggles with the safari’s cost and wonders if he’s being selfishly indulgent. Occasionally, he reveals a sly, delightful wit. In one passage, for instance, he describes delivering the holy word to an annoying fly by swatting it with a Sunday school book. His descriptions of tribal people gathering honey and dancing are vivid. Unfortunately, these illuminating moments are infrequent.

While the book is called “a photographic safari,” Carlyle’s photographs seem to be an afterthought: 48 small, black-and-white images scattered throughout like hidden jewels. These are the best parts of the book: beautiful, sensitive, well-composed and engaging. They could easily have been published as a photo essay and Carlyle’s writing used to accentuate his art.

Greater emphasis on the photography and less upon narrative would have made Africa: A Photographic Safari of interest to a wider audience. As published, the book will appeal mostly to Carlyle’s family and friends.