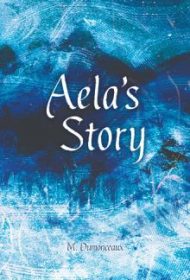 Although Dumonceaux’s novel combines elements of mysticism, magic and sentient gods, those features exist in a narrative world that feels pulled from the mists of medieval human history. In lieu of wizards, monsters and spells, Dumonceaux’s fantasy relies on profound character studies, settings drawn from Anglo Saxon Europe and overarching questions of vengeance, suffering and the human condition.

Aela, a 15-year-old Saxon girl, is out collecting herbs when her family is murdered by raiding Vikings in an unspecified village in pre-Norman-Invasion Europe. She finds a new home with Gytha, a wise woman who teaches her midwifery and healing through ancient, herbal-based cures. But even as Aela takes to her studies with fierce focus and skill, her family’s death remains an unresolved source of strife. Her discontent only grows when she falls in love with Hemwyth, a warrior with noble roots who weds another woman from the village.

Unsatisfied with her existence, Aela sets out to find answers and win vengeance. She quickly finds clues on a path to Pandor, the God of Chaos, who can help with the profound, existential questions that have long haunted her. What follows is a clash between mortal and god, a conflict spotlighting eternal human quandaries.

Dumonceaux follows the example of contemporary historical fiction writers like Marion Zimmer Bradley and Madeline Miller with her fusion of the fantastical with elements of gritty realism. The setting feels like a feasible realm in human history; even her interactions with gods feel removed from the fictional works of fantasy heavyweights like J.R.R. Tolkien.

That verisimilitude, along with Dumonceaux’s direct and unadorned writing style, adds immediacy to this story of a Saxon warrior searching for meaning. While the pace can sometimes stall under the weight of Aela’s inner monologues and interior conflicts, it delivers a refreshing take on fantasy that readers will find relatable and surprisingly contemporary.