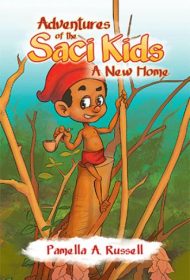 In Pamella A. Russell’s children’s chapter book, a young girl finds an old barrel on the beach with strange noises coming from it. Wanting to explore it further, she brings it home, unaware the barrel contains a mythical elfin-like figure—who is alive.

Eleven-year-old Holly is the newest foster child in her family. Along with three other children, she finds love and stability with Ma and Pop Spears. The morning after Holly finds the barrel, strange events occur: Flour is spread across the kitchen floor with traces of a small, solitary footprint, along with other perplexities. After Holly tells her siblings she has seen two glowing red eyes in a corner of the barn, they investigate. Suddenly, a whirlwind kicks up, revealing a one-legged elf with a red cap and pipe. He introduces himself as Saci and later reveals he’s a character from Brazilian folklore, and indeed loves mischief making.

Then one day, Mr. Drudge, owner of a failing antique shop, walks into the barn seeking objects to sell on commission for Ma Spears. The kids hide Saci in the barrel and refuse to show it to Mr. Drudge when he spots it. Later, when the barrel goes missing, they know Mr. Drudge is the thief—and unknowingly has Saci.

The plot continues with action and humor, unfolding seamlessly. Russell does a lovely job giving the children’s characters various quirks and qualities, revealing a bit about their traumatic childhoods. And some descriptions are lovely: “There was a healing quality to the rhythmic sound of the waves smacking against the sand, to the seagulls raucously calling out to each other, to the loneliness, the stillness, and the peace.”

Overall, however, with his innocence, playfulness and humor, readers will surely want more adventures with Saci.