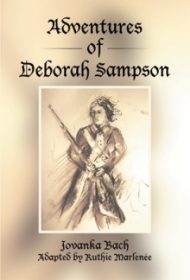 In this slim tale set during the Revolutionary War, a young woman sets out to discover what the future holds for her and finds herself in the heart of battle.

One of six children, Deborah Sampson was sent to live with another family after her father abandoned the family and died at sea, leaving her mother to raise the impoverished family alone. Now a young woman, the self-taught, capable outdoorswoman deems it time to move on.

Her first stop is to visit her family, who she has not seen in two years. Her visit soon leads to a romance arranged by her mother to clock master Nathan Andrews. But the two have barely spoken their wedding vows when Deborah bolts, leaving her new husband at the altar.

Disguised as a young man, she sets out to find the adventure she imagines awaits her, dodging trouble and her pursuing husband until she enlists with the Army. Writes the author: “She’d come to feel that it would be more honorable to be suffocated with the smoke from a cannon than to waste a useful, intended existence…just because she’d been born a girl.” With the adopted name of Robert Shurtlieff, Deborah proves herself a natural soldier.

This story was written originally as a screenplay by Jovanka Bach and adapted into a novel after her death, which may account for its brevity. While it lacks full character development and background, the author examines the main characters just enough to make the plot plausible. While Deborah’s ability to so easily pass as a male is questionable, it’s not entirely unrealistic, given her ability with guns and horses, and her courageous spirit. Readers might question, however, how Deborah’s relationship with Nathan develops in only days, and why, despite her deep aversion to marriage and little feeling for him, she agrees to be his wife.

Nonetheless, this is a quick, entertaining read that might appeal particularly to fans of stories from that era.