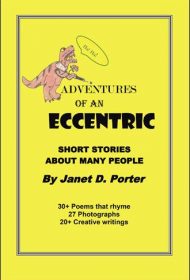 In Adventures of an Eccentric, Janet D. Porter shares vivid memories, poems, short essays and stories from her life experiences from birth to the present.

Porter’s book is a collection of vignettes, beginning with a mother who never expressed love for her and a father who once washed her mouth out with soap when she told a lie, but also showed her the positive possibilities inherent in a violent thunderstorm. Raised in Greensboro, North Carolina, she recalls the WWII years when that city was the only one in the U.S. with an active army base within its limits.

Porter had to overcome several changes of residence and schools, traumatic since she was an awkward child battling dyslexia. In her teen years, she came out of her shell, developing academic skills including writing and public speaking. With degrees in education and social work, she had a long career in teaching, court protective services, juvenile probation and medical social work, responding empathically to those with specials needs and social deficiencies.

Porter’s lively, very personal aggregation includes rhyming poetry and family photos. There are also hundreds of brief word portraits: a cherished female relative, sort of a surrogate mother whom she called Unk; Uncle Shep on whose farm she learned to milk cows; a heroin addict whom she voluntarily fostered in her professional career; several romantic interests; and Loren, her husband since 1972.

Throughout, she offers interesting details about the past. For example, she describes receiving, as a child, a “long gray balloon that looked like a zeppelin. This was in memory of the Hindenburg crash.”

Sometimes, Porter’s varied reminiscences skip backwards or forward in time, which can be confusing. And some entries and redundancies could have been trimmed.

In the main, however, she delivers an enjoyable look, both humorous and poignant, at the ambitions and aspirations of a self-described eccentric woman, highly attuned to finding positive lessons in even the most daunting situations.