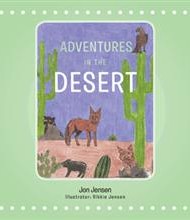 This ambitious, but unfocused, picture book teaches children about animals in the desert, in addition to man-made threats to those living there. Small, hand-drawn, colored-pencil sketches with tiny details and large landscapes accompany the story.

The adventure begins with a chance meeting between a raccoon and desert kangaroo rat, who then save a bobcat that has been washed down the stream by a monsoon. Soon, they all become friends, along with a baby pig left behind by a trio of nasty javelinas. Stinging scorpions, a hawk, and a rattlesnake attack the animals, and as the raccoon recovers from his snake bite, they eat catfish.

When a bulldozer arrives to begin building a housing area, the animals sabotage the driver’s efforts by stealing his hat and mauling his leg. The friends rejoice when the housing development project is canceled. A pack of coyotes then threatens the friends, but after the group attacks the coyotes, the desert animals finally live happily ever after.

The plot is meandering and includes many animals and situations, an approach that gives the story width, but no depth and little focus. Young children also might be confused by the moral. The author concludes with: “Their group had earned the respect of the neighboring animals, and the neighboring people.” But in fact, the animals have used aggression and violence to evoke fear throughout the story, which is not a lesson most parents will appreciate for their children.

Additional problems include an unwarranted shift in tenses, a run-on sentence (“It was too late the rattlesnake had lurched and struck at him”), inconsistent spellings and misspellings and different animals quoted in the same paragraph.

In sum, young children may find the situations interesting, but the book requires rewriting and editorial assistance to be an effective teaching tool.