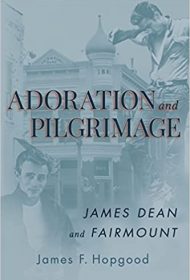 Anthropologist James F. Hopgood draws on the tools of his trade for this study of James Dean fans, asking why a movie star who completed only three films before dying at age 24 in 1955 has drawn and retained such a loyal following.

Hopgood places the bulk of his attention on the town of Fairmount, Indiana, the setting for Dean’s teenage years and site of his grave. The author paid regular visits there for over a decade, to observe annual events given in Dean’s honor, explore museums dedicated to his memory and interview fans who had traveled or, in some cases, moved there to honor their idol. Based on this “field work,” Fairmount comes across as a kind of pilgrimage site, and Dean’s fandom as a quasi-religious movement.

Hopgood provides just enough biographical info to show how Dean’s remarkable life—combining humble origins, early achievements, and dramatically curtailed promise—allows very different interpretations: from the local boy-made-good still remembered in his hometown, to the rebel against small-town life, a view widely held by outsiders. Among his most devoted fans, the “Deaners,” his significance is less about larger cultural movements and more about individual creativity and self-exploration.

Hopgood’s narrative is sometimes meandering, and occasionally the writing bogs down in academic jargon (“The pilgrim again views the metaphorical looking glass and in seeing her other (in a form of James Dean, perhaps) steps through; the virgule of self/other dissolves at least for a time”). However, the author keeps the book on firm ground with vivid profiles of individual “Deaners,” who variously recount being inspired to pursue acting careers, teach existentialist literature, or join the ’50s San Francisco Beat scene. His book is often insightful and sometimes even moving.

The James Dean fan community is perhaps ultimately too diffuse a phenomenon to produce any grand overall thesis, but this book represents an intelligent, worthwhile contribution to understanding celebrity’s role as a form of modern myth in all our lives.