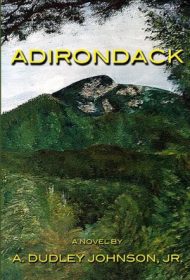 A. Dudley Johnson, Jr. pens a story of forbidden love in his debut novel, Adirondack.

In 1897, Anna Tattersall finds herself growing apart from her husband Will. They enjoy a prosperous life with their two young sons in Fairfield, Connecticut, where Anna participates contentedly in societal events. But as Will’s legal practice grows, he spends more time in New York City, and the city’s excitement becomes increasingly appealing to him but not to her.

Anna hopes to rekindle their love during their annual vacation in the Adirondacks. However, after Will returns home due to business, Anna begins a romance with a wealthy Native American (referred to by the author as “Indian,” as was then customary) who rescues her during a surprise storm. She now must consider whether to follow her heart and risk her marriage and social standing or reject her newfound feelings.

Johnson immediately draws readers into Anna’s world. The author notes that he combed through his great-great-grandmother’s diaries for details of Keene Valley life, and he richly describes the region’s allures, from the mountains “breathtaking in their splendor and glorious in their rugged beauty,” to the aroma of “bacon and eggs mixed with the smell of the fresh mountain dew and the forest bed of needles unique to the Adirondacks alone.” The story proceeds swiftly through short chapters, including several bodice-ripping scenes, populated with interesting characters.

Readers will encounter a few issues. Although willing to stand up to racial prejudice, Anna isn’t  entirely sympathetic; she appears somewhat selfish as she falls from one wealthy man’s arms into another’s with neither remorse nor much consideration of her future. Additionally, the story ends abruptly, leaving readers to wonder whether Anna will find lasting happiness. A more contemplative ending and less passive voice throughout would improve the novel.

Still, these flaws do not significantly impinge on the book’s charms. Overall, this is an enjoyable, light read for historical romance fans, particularly those familiar with the Adirondacks.