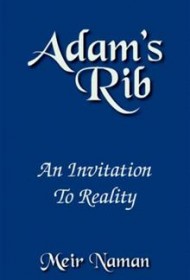 Adam’s Rib is a memoir, at least in part. It’s also a philosophical treatise. Both are large-scale, ambitious projects, and at a mere 50 pages, this book is overwhelmed by the scope of that ambition.

Author Meir Naman emigrated with his siblings from Tehran to Los Angeles as a child. Their parents came along later. Despite being “(d)ecedents [sic] of Israel” and thus a minority in Muslim-dominated Iran, the family had property and were prospering there. In L.A., they started from scratch and built an electronics store into an import/export business.

That much of the story is easy to describe, but the rest is muddied by rambling, error-laden writing. Consider this difficult sentence: “Only then realizing, that there is far more unimportant issues than important issues. And, if the important issues are not to one’s satisfaction; then maybe one should look elsewhere, instead of talking about it.” Digressions on the Bible, the Torah, and the nature of time are all distractions that never cohere.

Naman’s story of trading life as an outsider in one country for the same in another country could make for an illuminating memoir: When the family comes to L.A. and realizes many of their customers come from Mexico, for example, they are quick to begin learning Spanish. That resilience and attention to culture forged by circumstance would be interesting to readers. Naman may also have enough to say about religion and philosophy to fill a volume. However, combining the two as he has done here and compressing them into such a small volume makes for a disjointed and unsatisfying reading experience overall.