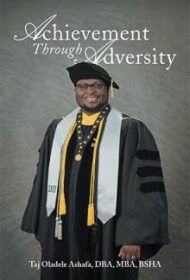 Ashafa was held back in school, enlisted in the Nigerian army at 17, and was shot and left for dead. Subsequent amputation of his arm prompted a move to the U.S. for medical treatment. As troubles continued to plague him, he routinely reset his mind to achieve. The author eventually earned several degrees, became a husband and father, and now works successfully in American business, crediting God for His help.

Ashafa is forthright about a suicide attempt and his struggle to control a violent temper, yet he also describes an incident when a colleague turns a gun on an innocent man and the author intervenes, endangering himself. Many quotes are memorable: “He [God] doesn’t create a lock without its key. Every problem is a lock, and there is always a key to unlock it.” He testifies that hard work and faith in God result in personal success.

While Ashafa is earnest in wanting to help others, the book could use more clarity, narrower themes, and improved grammar and spelling; for example, he writes: “…I listened to her [sic] went back to school” and “Oprah never allowed her circumcises [sic] to determine her future”). Much of the content, especially about educational requirements and cryptocurrency, seems unnecessary, and the writing style is markedly different in places, as if written by others.

Additionally, although biblical scripture is often quoted, Ashafa also mentions that his grandmother “knelt and started saying, ‘Allahu Akbar’” and that “God created Prophet Mohammed and Jesus Christ as His messengers to the world.” This is in stark contrast to the Christian belief that Jesus said, “I am the way, the truth, and the life: no man cometh unto the Father, but by me” (John 14:6), which muddies the author’s message.

Despite such issues, the book provides practical information and inspirational stories that some readers might appreciate.