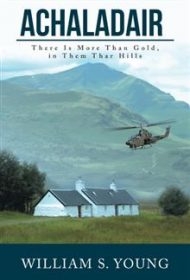 Set in 1962 as a semi-sequel to an adventure during which Frank and Tom save JFK from an IRA-Communist assassination, the narrative bounces between events in a sometimes-confusing way and seems to reference occurrences from the previous novel that may frustrate some readers.

At the story’s start, the team is holed up in Scotland’s Bridge of Orchy Hotel. As it celebrates its last mission, a team member becomes interested in a pretty girl. Checking her background, he learns that she had been an aircraft designer in a Scottish Rolls Royce factory, but had mysteriously disappeared.

Meanwhile, it may be no coincidence that Russian operatives are scheming to steal secret, high-tech aircraft being built inside an old gold mine nearby. And other bad guys work to smuggle guns to the IRA. As the story unravels, the British agents aim to keep guns out of the IRA’s hands and the aircraft from the Russians.

The story has the feel of a James Bond movie, highlighted by fast-moving repartee filled with ironic humor and plenty of sex as the spy-guys make quick seductions of more than one willing female hotel employee. ​While well-paced, however, its character development is superficial, making it hard to emotionally connect with the story. Also, descriptions of characters and setting are minimal, lacking literary flourish. And Young employs Scottish dialect—“Whit dae ah dae aboot bringin’ it doon wa mae rocket launcher?”—that requires a second parsing to discern meaning. Finally, the novel relies more on “telling” rather than “showing.”