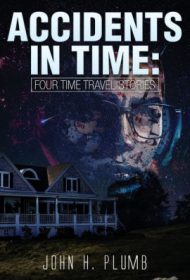 In this story collection, author John Plumb explores time-travel themes in various forms and contexts, from two rings that can stop time to a special outfit that allows the wearer to jump into the future.

In each of these four stories, the protagonist creates a device that manipulates time. None prove the gateway to the happiness, wealth and fame the inventor envisions, however, and some result in bloodshed or even murder.

In “Time Without Motion,” two rings can slow—and almost stop—the passage of time when held together, but there’s danger waiting in that nearly timeless zone, along with the moral hazard of the theft the device enables. In “The House of Time,” a Royal Society member in 1841 builds a house that jumps forward by a decade, then stands in place for a week and jumps forward again, etc., until the process is finally interrupted close to the present day.

“Twenty/Twenty” features a pair of glasses that allows the wearer to see into the future, while in the last story, “Fast Forward,” an outfit—consisting of a helmet, boots and a belt that create a magnetic field—can transport wearers into the future, at first by a single day, and later by years.

While the stories are richly detailed and imaginative, Accidents in Time suffers from several issues. Some of Plumb’s character descriptions can be offensive: Women are almost exclusively described in terms of their physical attractiveness, and, in one instance, the narrator expresses surprise that an attractive woman holds a doctorate. The author describes an accountant in one story as “a short older man maybe in his mid-seventies with black curly hair and a larger Jewish nose.”

Additionally, many narratives meander like daydreams, packed with extraneous characters and digressions. Also distracting are misspellings and misused words, such as “antidote” for “anecdote,” or “disparate” for “desperate.”

Such flaws greatly impact reader enjoyment. Nonetheless, the stories might interest those fascinated with time-travel fiction.