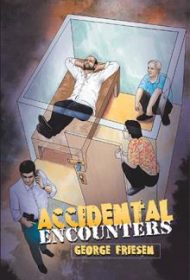 George Friesen’s new thriller follows the misadventures of a group of characters connected to a trans-Atlantic drug-dealing operation.

Brothers Dave and Bob Bigelow have long had a strained relationship. Lawyer Dave is a responsible family man, while Bob, who has dabbled in reckless behavior since his teens, works for the Ottoman Trading Co., a Turkish import-export company, and deals drugs on the side.

After meeting by chance in a Mexico City restaurant, the brothers are kidnapped and subsequently held hostage by a drug cartel. Sharing their cell is Demir Ozmen, also an employee of Ottoman Trading. As the trio awaits release or death, readers learn that the Ottoman company supplies Mexian heroin to the European drug trade. Rivalry among Mexican cartels has led to the kidnapping of Demir; Bob, who had traveled to Mexico to pay Demir’s ransom; and Dave, who was simply in the wrong place at the wrong time.

The hostage crisis is the narrative’s main driver, but readers meet several other characters based in Turkey and Mexico, each with his or her own connection to Ottoman’s illicit work.

The story is told from various characters’ points of view, all in close third person. This adds texture to the story but also undermines its narrative pull. While Bob’s and Dave’s story provides a strong hook and two developed characters, other pieces of the story – told through the eyes of, among others, a gangster; his girlfriend; Ozmen’s ex-fiancée; and her cousin – feel like a whirlwind tour: tiring and potentially confusing.

On the other hand, Friesen’s writing style is appealing and genre-appropriate: forceful enough to keep readers turning pages, with evocative, scene-setting pauses. The novel’s references to the contemporary international political climate offer a frisson of realism without overwhelming the story.

Accidental Encounters will likely satisfy some fans of international thrillers. A more streamlined narrative structure, however, would have better showcased Friesen’s writing skill and appealed to a wider audience.