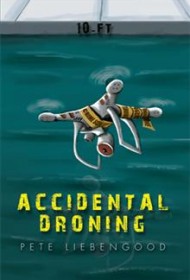 In this mystery thriller about sex and politics, a regular Joe’s life is blown apart when he accidentally video records a murder while flying his hobbyist drone.

The novel’s hero is Bo Granger, a spirited 40-something who just got fired from his job as manager of a golf pro shop. On paper, Bo married well to Lena Jamison, a former news anchor turned senator who is running for governor of California. Unfortunately the viciously ambitious politician is having sex with her campaign manager Rhino Harris—and anyone else who will help her win. Lena and Rhino are merely the tip of the iceberg of a cast that includes corrupt cops, foul-mouthed TV anchors, scheming politicians and other exaggerated characters played for ribald humor.

While this drama unfolds, an unbelievable series of circumstances trip up Bo. Sparks hires a fiery Cuban-American journalist to investigate Bo, but she winds up switching teams instead. Meanwhile, Rhino devises a scheme directed against Bo, which then spurs Lena’s multimillionaire father to go after Bo as well.

Liebengood’s writing is fine, if a bit over-reliant on profanity in lieu of character nuance. Unfortunately, with the exception of Bo and the journalist, most of the cast members are mean-spirited and stereotypical. There’s also an odd moment in the story’s beginning involving passengers on an LGBT cruise. It’s irrelevant to the plot and, like some of the missteps here, unintentionally takes readers out of the story.

In the end, the plotlines all converge, but it’s a messy resolution to a story that never quite pulls off the tightrope walk between comedy and conflict. Still, the novel delivers some entertaining moments that may entertain readers of this genre.