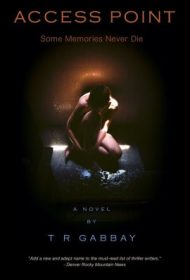 The murder of a young American art student in London provides the catalyst for Access Point, a compelling thriller with science fiction and mystery elements.

The victim, Mia Fraser, isn’t alive for much of the story, having perished at the hand of an unseen assailant. Regardless, readers follow her through many of her experiences because after Mia’s death, her memories were uploaded into the mind of Ula Mishkin, who had been renting a room to Mia.

Ula, who lost much of her own long-term memory after an accident that left her comatose for a year, hopes to figure out who killed Mia—at least at first. But the longer Ula dwells in Mia’s memories, the more complex her relationship becomes with the dead woman who lives on in her mind.

At the same time, Mia’s murder is being investigated by a police detective, Sarah Boyd, whose role through much of the book is to chase down red herrings until the requisite showdown with the story’s true villain.

Access Point is a notable change of pace for author Tom Gabbay, who previously wrote a series of well-received spy thrillers published in hardcover by William Morrow. This book explores some interesting metaphysical concepts, such as following a character who actively responds to events around her, despite only existing in an artificial world created from her memories.

The story often plays with the reader’s expectations of what’s actually occurring—and from whose perspective—when Ula and/or Mia are front and center. That works for the most part, although the chronology remains a bit convoluted, and some key characters could have used more fleshing out.

Access Point is not a whodunit but a psychological thriller with compelling explorations of memory, obsession, and identity. Readers will find it an intriguing and entertaining read.