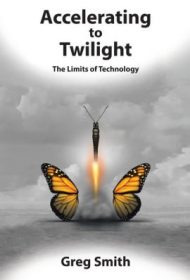 Greg Smith takes the long view on history, humanity and life itself in Accelerating to Twilight, a thoughtful discourse about the nature of man’s place in history and our use of technology.

Smith first examines the dawn of our species and the early technologies that helped us evolve. Over many chapters, he condenses the history of civilization and then ponders the effects of technology, using the term broadly to cover everything from agriculture (the idea of growing our own food instead of finding it, and the tools that made it possible), weapons (from sticks to spears to guns), the rise of language for communication and the human diaspora that such innovations allow.

Smith also offers chapters that focus specifically on communication, war, agriculture, transportation and production and, finally, considers the limits of technology. “Technologically, we have nowhere to grow,” he warns. He worries that agriculture relies on risky genetic modification and high-tech pesticides and herbicides to feed the world’s exploding population, and that an insatiable consumer culture and the increasing concentration of wealth and power leaves us at a societal tipping point. Ultimately, he concludes that we must stop relying on technology and become more “life-centered.”

Smith writes conversationally, with a narrative thankfully free of didacticism. He includes so much history and other information that the work is never boring. Although a rundown of technological history and its effects on humankind isn’t a new idea, the author presents the timeline in an engaging, well-organized format.

Smith considers birth control a major technological danger, a moral standpoint that some may find offputting. Readers may also feel that categorizing such developments as “technology” is a stretch, but he makes a convincing case that technology is the result of knowledge and research; thus, even birth control falls into that category.

Overall, the book is sure to appeal to armchair historians and social critics. It’s not just for geeks—everyone can benefit from mulling over the points Smith presents.