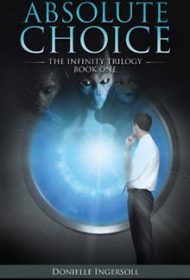 In this novel that combines elements of science fiction, mystery, and religion, physics professor Art Goldstein has been trying for years to create an anti-gravity propulsion unit. The plot centers on what happens to him after he discovers “a small gray, button sized cylinder shaped object floating in the space” between the magnetic conductors in his apparatus.

It turns out the cylinder is a gateway to an alternative universe. Art calls it “MAP,” short for Metaphysical Acceleration Process. He steps through into a semi-solid universe in which he has “the power of absolute choice. He could carve his own future, perhaps even change the past.” And so, his adventures begin.

This is a promising premise, but unfortunately, the writing isn’t up to the author’s imagination. The loosely woven plot is confusedly episodic, tied insecurely together with the thread of alternative realities: Art goes through one occurrence after another, experiencing metaphysical realms, time shifts, telepathy, psychokinesis, apportation, postcognition, and aliens, “greys, reptilian, reticulan humanoids, and other creatures”—until, in one earth reality, 36 months into the future, he decides to visit a future mall and concludes, with the help of a page and a half of Revelation 9, that there are seven eternal realities, seven earth realities, and, possibly seven Abyss realities full of stinging demons. There’s no ending per se, merely a “to be continued.”

For a scientist, Art is unabashedly avaricious and callous. When not thinking about monetizing his discoveries (“A person could make millions, even billions bringing sick people into this dimension and charging outlandish prices”), he’s justifying being with his new love, rather than attempting to go back in time to prevent the murder of “the two most beloved people in his life,” his wife and son.

Finally, the book requires better editing to shape the content and correct a plethora of spelling and grammar mistakes.
As a result of these many issues, Absolute Choice offers a largely disappointing reading experience.