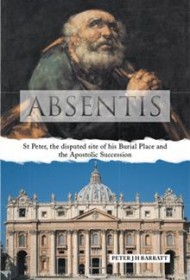 Although apostolic succession, or how spiritual authority is passed from the early apostles to their successors, isn’t exactly fodder for dinnertime conversation, it is a point of contention among various denominations of Christianity. In Absentis, Peter J H Barratt, takes aim at the Catholic Church and its claim that St. Peter, the man who denied Jesus three times and was later supposedly martyred and buried in Rome, “was the first pope of the Roman Catholic Church.”

Over a billion followers accept this statement not only as an article of faith but as truth. “Yet, despite the impressive number of believers,” the author argues, “it is anything but a proven fact.” In reality, Barratt proposes, there is “no evidence to support [these] popular assertion[s] from either history or the scriptures.”

Barratt is a competent writer with a solid grasp of Christian history. Outlining what we do know about Peter, the ecumenical councils and schisms that resulted from conflicting beliefs, and other theories about succession, he presents a good case for his premise, demonstrating that there is little to back up the Church’s ideas that place Peter in Rome after Christ’s death.

This will be interesting to those who put stock in such proof. But ultimately, religion isn’t about facts. If you apply Barrett’s rationale to the resurrection, for example — the key tenet of the Christian faith — then you dismantle that religion altogether; no evidence exists for that pivotal event either, yet it is accepted by nearly a third of the world’s population. Tradition in the Catholic Church is nearly as important as the Bible, and as the author admits, that’s probably never going to change

While there isn’t much new here, and the book begins to strike the same note repeatedly by the midway point (the Catholic Church is wrong to keep perpetuating this tradition), Absentis serves as an informative and readable introduction to a controversial topic in Christianity.