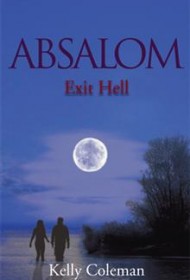 Drugs, violence, lust and greed are the familiar building blocks of this reasonably well-written crime thriller.

Can true love be far off?

But first we grapple with a lustful, pot-growing psychopath armed with a .357 magnum, a Native-American mystic, a good-guy nightclub owner and a creaky murder plot a la Double Indemnity.

Coleman handles the tawdry end of pulp-fiction prose relatively well: We behold “Jinx oozing sensuality through a thin scent of musk smelling [sic] sweat.” The author’s not as skillful when applying stiff psychobabble to characters’ states of mind: Thus does Jinx’s heat set loose in straight-arrow Catcher “precognizant inclinations heretofore undetected.” (This comes amid ten repetitions of the word “paradigm” in three pages.)

An able screenwriter might whip Absalom into film-worthy shape, but at least one key element would have to go: Coleman’s tired male fantasy of the shining knight reforming the amoral whore — even to the point of rediscovering “the original Jo Ann Jenks . . . the virgin.” Moral redemption is meant to be the payoff here, but in the end, hardly a speck of hard-boiled cynicism survives: noir fades to blanc, as if by magic.

Better to keep the dirt and spare the Lysol.