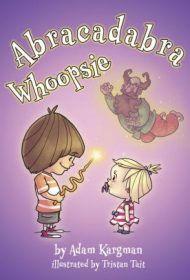 A boy annoyed by his little sister is given the power to make her disappear in the delightfully illustrated children’s picture book Abracadabra Whoopsie.

Young Jordy has a great life, except when his toddling sister Keeka gets in the way. When Jordy nearly hits her after she breaks his action figure, he’s put in timeout, wishing she would “just disappear.”

That night, a wizard named Perziluzo appears in a dream and gives Jordy a wand that can make his sister vanish with the words “Abracadabra Whoopsie” and reappear with “Whoopsie Abracadabra.” After making Keeka disappear, Jordy enjoys playing alone, allowing her to return only when he sees fit. But when he misplaces his wand while she’s gone, Perziluzo returns and swipes the wand, saying, “I hoodwinked you!”

Faced with his sister’s permanent absence, Jordy appeals to Perziluzo, telling the wizard “I love her” and asking him to return the wand. Perziluzo relents and Keeka returns, yielding a happy ending with a twist: Keeka gives Jordy a taste of his own medicine, using the wand to make him disappear.

Adam Kargman’s framework—a child learning to appreciate a younger sibling—isn’t unique. But he puts his signature on the book, from the names of Jordy’s toys (a “Metal Man” action figure and “Dino Pals” jigsaw puzzle) to those of the characters (“Keeka” and “Perziluzo”). The story is well-written and engaging.

Mostly, though, Abracadabra Whoopsie stands out because of its cartoon-style illustrations. TristanTait is a master of capturing expressions, from the sly smile of a boy about to rid himself of his pesky sister to the joy that same boy feels when she returns at book’s end. Tait’s illustrations are often spectacularly funny, aiding the storytelling so well they could have told the tale without words.

Perziluzo’s character, a malevolent trickster with a soft spot, might be somewhat confusing to very small children. But that’s a minor hiccup. Abracadabra Whoopsie is a well-polished, dynamic, highly enjoyable picture book.