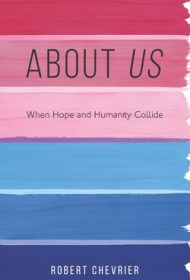 A garrulous narrator reflects on a formative year of his youth in Robert Chevrier’s About Us: When Hope and Humanity Collide.

This brief story is comprised of a series of short, related vignettes with a loose narrative arc. In an unspecified locale in 1969, a nameless nine-year-old describes the highlight of his school day: the lively discussions and interpretative art sessions that engage his avid mind. Outside class, this aspiring journalist enjoys chatting with customers at his brownie and lemonade stand, particularly wise Mr. Anderson and Father Donovan. He also absorbs life lessons from his teacher and a girl he calls Fusilli, who later becomes his life companion.

This spare scaffolding supports a sequence of proclamations on subjects ranging from war, politics and religion, to pollution, bullying, and “the etiquette of destruction”; “Science is a designer, an innovator,” one precocious classmate claims, “an artist that’s busy giving birth to bush babies and turtles.” The prose can be purple at the expense, sometimes, of comprehension, although there are lovely moments, as when the narrator, out biking one evening, says “[I was] lucky enough to have the most beautiful sunset follow me home.”

The jaunty tone of these reflections blends wry amusement with the exasperation of a narrator weary “of violence, of racism and of abuse of any kind,” among other concerns. Nostalgia for the narrator’s innocence in the “hippie era” —when “cool wasn’t complicated”—is jarring when juxtaposed with bitter reflections on the present-day crises of coronavirus and climate change, especially considering the extreme turmoil of that earlier time.

Readers who favor narrative arc and character development won’t be won over, but those who like their philosophical musings mixed with whimsy may appreciate this friendly raconteur pondering “how and why was it that this beautiful world of ours, this only world of ours, remained so hostile, so violent, so upside-down for so long?”