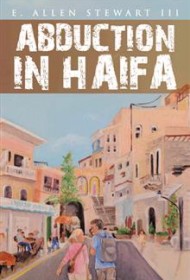 E. Allen Stewart III’s Abduction in Haifa, recounts the spiritual reawakening of middle-aged, born-again Christian, Midwestern housewife Martha Browning. She travels to the holy lands of the Middle East to see the world where Jesus lived and soon finds that her past spiritual rebirth pales in comparison with the growth that she experiences during her travels.

In the book’s first section, we meet the protagonist, glean that her marriage is not happy, and watch her encounter a strikingly handsome doctor whom she finds physically and intellectually attractive. When the doctor introduces Browning to his hospitable family, Browning and the reader are treated to a dinner-table lecture, delivered by the doctor’s professor-brother, about everything from spirituality to the need to save the environment. The lecture, the handsome doctor, and his warm family wow Browning, who decides to make some major changes in her life. But before she can do that, she is taken into captivity, during which she makes an even deeper spiritual journey.

Two elements take this out of the predictable. One is the fact that Browning’s enlightenment does not particularly stem from the experience of walking in the footsteps of Jesus. The other is a powerful plot twist that rewards anyone who reads to the end of this novel.

For some readers, though, sticking with the novel may present a challenge. That’s because the pace slows, as the narrative becomes essentially a philosophical monologue that continues for four chapters. After that, action picks up, but this may be too late for all but the most patient reader.

This not your average kidnapping story. The reader who takes refreshment breaks during the lecture along with the family in the novel will be inclined to continue and reap the reward in the conclusion of a “talky” but heartfelt book that has some power to enlighten.