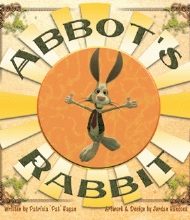 Abbot’s Rabbit is an interesting, if convoluted, story of human-animal friendship.

Whether spending time in the city or country, young Abbot starts to notice different types of birds and wants to get to know them better. Using his own savings, Abbot buys bird seed and begins to feed the birds in his neighborhood, endearing himself to two new friends: Bird (the first bird to try the bird seed) and Chipper (a chipmunk). Out of love for their new human friend, Bird and Chipper conspire to find Abbot a third friend, a rabbit from the forest. More friends appear as the story continues.

The story’s main themes— friendship, nature, different species coming together— are appealing and relatable. Unfortunately, the text can be confusing, as when the narrator notes that Abbot would have to feed the chipmunk “since he wanted to be friendly with the birds.” (Why is it necessary to tolerate the chipmunk for the birds’ sake?) Or when Abbot is exceedingly happy to know that chipmunks like to burrow. (Why does this bring him such joy?).  Also, sometimes, background information is misplaced; for example, this comes toward story’s end when it would have worked better at the beginning to set up Abbot’s mindset: ”Once upon a time Abbot was a sad little boy—sad because he spent much time without friends.”

Additionally, the writing can be awkward: “Abbot had a busy little mechanic, Builder of tunnels and writer of his song lyrics, who was Chipper; he had a wonderful musician, composer of his song, who was Bird; he had a sweet and quiet pet who was Rabbit.”  The unnecessarily complicated sentence structure weakens the story.

Finally, the illustrations have a charming, video game-like quality, but a handful are too dark or blurry.

Abbot’s Rabbit has promise, and its heart is in the right place, but the story is hindered by its confusing narrative and inconsistent illustrations. Revision would greatly improve its appeal.