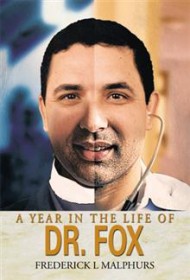 A Year in the Life of Dr. Fox is a thriller based on truth, according to the author’s Introduction. It revolves around the Mexican drug cartels prevalent in 2006, when the president of Mexico declared war on these gangs. The author notes that characters’ identities have been changed to prevent harm to himself and his family, “if ever those evildoers choose to be offended by the truths described in this book.”

The plot centers on the de la Vega family. When their sister Tina is tortured and killed as a consequence of her husband’s reluctant involvement with the Pacific drug cartel headed by Fidel “El Gris” Guzman, identical twins Eduardo and Teodoro de la Vega vow to shatter the criminal organization. After all, their family is “fabulously wealthy”; they have the resources to succeed where the police have failed.

Teodoro mostly drops out of the story about halfway through, due to his objections to violence as a Catholic priest. But the rest of the de la Vegas are all in, including the gorgeous lawyer Lena Arrelano, whom Eduardo marries after a whirlwind romance. “My heart and mind settled on this new woman in an instant,” Eduardo, the eponymous “Dr. Fox” (for his fabulous good looks), tells his adopted brother Flaco in a stilted remark typical of the dialogue, which often sounds as though it has been poorly translated from another language.

The author, is better with action scenes — even if it does smack of wish fulfillment to have Eduardo, a surgeon not a soldier, dispatch four heavily armed thugs aided only by a walking stick. Somewhat more plausible mayhem brings in squadrons of Vega family employees to storm cartel strongholds, disrupt drug shipments, and steal some of its rivers of cash. In the end, author Frederick L. Malphurs’ portrait of the cartel’s stranglehold on Mexican society leaves readers wondering if any real justice is possible.

While flawed in the aforementioned ways, A Year in the Life of Dr. Fox compares well to many traditionally published commercial thrillers. It should deliver enough action and interest to keep genre fans satisfied.