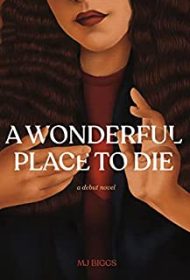 MJ Biggs’ novel, A Wonderful Place to Die, tackles the difficult subject of domestic abuse in teenage and college relationships.

The novel follows Dani, a teenage rock singer and guitarist, from high school through her first job after college. It centers on her relationship with Desmond.

Desmond is hot and cool and, of course, troubled, and his controlling and jealous tendencies grow. As Dani makes excuses for his abusive behavior, Desmond’s mistreatment grows until finally she finds must make a consequential decision about their future.

The story’s biggest strengths are its characters and setting. Dani and Desmond are believable and authentic, as are Dani’s best friend Bernadette, her beloved grandparents and even minor characters. Readers will sympathize with Dani and cringe when she doesn’t act in her best interests.

Biggs’s descriptions are vivid, and readers will smell the pasta and meatballs at her grandparents’ house and visualize Dani and Bernadette discovering treasures in her grandmother’s closet.

These high points largely make up for the novel’s main shortcoming: the dialogue. Sometimes the dialogue sings, but often it’s bland and focuses too much on mundane conversation. There are also occasional capitalization errors, and Biggs often points out Dani’s thoughts by writing “I thought”; this is unnecessary, as readers can easily discern her thoughts from her spoken words.

Even with these shortcomings, readers who enjoy redemptive stories, and fans of rock and roll fiction will be sucked into Dani’s world and root for her to right herself.