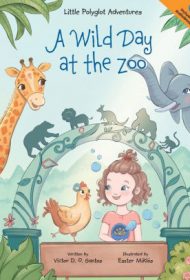 Author Victor D.O. Santos is a father of polylingual children and an expert in foreign language learning. This book is part of his Little Polyglot Adventures series, which endeavors to help children learn foreign languages.

The story opens on a unique day at the zoo: Visitors can bring their pets. Dylan and his little sister Isabella are excited to bring their pet chicken, Kiki. Although the zoo requires visitors to keep their pets by their side, Kiki manages to end up in the giraffe’s enclosure. Luckily, Isabella’s quick thinking saves the day.

The book’s plot is kid friendly and appealing. Animal facts are sprinkled throughout by the main characters, which makes learning natural, rather than forced. The book embraces multiculturalism by depicting people from many different cultures, and while the illustrations aren’t especially notable, they are appropriate and befitting the story.

Unfortunately, the effort to teach foreign words falters. In addition to English, Dylan and Isabella speak Portuguese, like their father, and Ukrainian, like their mother. The text introduces only two words/phrases in each of those languages, and it also presents one word in Spanish and another in Turkish. Introducing so many languages at once may confuse young readers. Since the book is a series, having each title focus on one language (with more phrases included) would be much more effective.

Although the author includes a link to online audio pronunciations of the foreign words, it would also be useful to have a pronunciation key printed in the book itself.

A Wild Day at the Zoo delivers an entertaining story. With some of the suggested changes, it could be a useful addition to the growing genre of diverse children’s books.