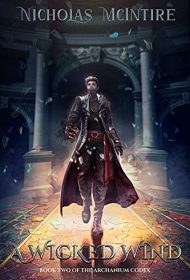 Nicholas McIntire’s dedication to elaborate world-building is more impressive than ever in A Wicked Wind, his sprawling sequel to 2019’s The Hunter’s Gambit.

In his second journey to the realm of Ilyar, McIntire builds upon an imagined world of angels and demons, monsters and mysticism and the Archanium, “a vast and complex network of energies” that offers characters access to wondrous magic and fantastical gateways between realms.

In the first installment of The Archanium Codex series, McIntire’s story saw a simple farm boy taking on the mantle of prophecy and epic heroism. Here, that farm boy—the hunter/warrior Aleksei Drago— has transitioned from wide-eyed innocent to grizzled protagonist. He’s now on a quest to rescue a kidnapped queen and princess, and he’s established a magical bond with Jonas Belgi, a prince who’s engaged in his own battle with the demon Bael.

McIntire delves even deeper into the details, lore and mysticism of his imagined realm. As Aleksei takes up the military struggle that ended the first installment – an epic campaign pitting his group against magi, or magic wielders, and others commanded by Bael himself– he’s also pulled to the imprisoned Prince Belgi. Aleksei must fight a battle on two dangerous fronts, even as he faces dark magic that impacts his grip on time itself. Belgi, meanwhile, must wage a much more intimate and otherworldly battle against Bael.

The sheer density of McIntire’s world may be daunting for casual readers, and it helps to have read the first installment. Out-of-context explanations such as, “He was shielding you from the Presence with the Seraphima, but invoked in such a way, it adds the power of his connection to the Archanium along with it,” are daunting enough for series veterans. They may be completely overwhelming for new readers.

That said, fantasy fans looking for a carefully constructed universe populated by three-dimensional, compelling characters will find plenty to love here. McIntire’s world feels boundless once its dimensions are clear, and he uses this sequel to construct an ambitious universe with unlimited action.