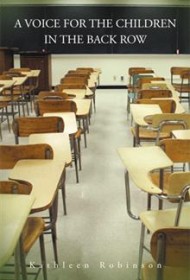 Why do some students gravitate toward the back of the classroom? It may be due to a lack of preparedness, insecurity, or likely, according to Kathleen Robinson, an overcrowded, test-focused, antiquated educational system. While most classroom seating today is more creative and inclusive in the form of circles, tables, and horseshoes, many students still remain marginalized. In a short collection of reflective essays from 1956-2006, Robinson shows how students in the back row are often the most needy.

Robinson taught in the Carribean island of Trinidad and Tobago where racial tensions and civil rights struggles accompanied rapid changes in national leadership. Her essays tell a universal story of challenges all teachers face navigating a flawed system where reforms neglect “the needs of individuals like the children in the back row” — Robinson’s powerful metaphor for students who do not experience the inclusiveness learners deserve.

Robinson identifies “at risk” students as children who enter school in compromising circumstances, live in dysfunctional families, suffer discrimination from immigrant status, or are specially gifted — atypical students whose academic fate is compromised by a “one-size-fits-all” approach to education.

We meet the confident, disengaged John, who reveals his teacher’s occasional incompetence and steals her classroom authority; moody Akim, a Muslim student whose family struggles motivate his teacher to reverse his hopelessness; Victoria, an adopted street girl who responds slowly under a dedicated teacher’s tutelage. Robinson’s story of Ixora, from a 1956 classroom, may seem dated; however, when contrasted with John’s tragic profile from the 21st century (as drugs, gangs, and political upheaval intensify), we see how little progress has taken place in educational reform through the years.

Any practicing educator will find a fellow traveler in Robinson and appreciate her tales of marginalized learners. Concluding up with a plea to reconsider top-down reform in education, Robinson calls for an approach that will end future student temptation to seek a haven in the back row.